We are currently living through historic uproar that our children will read about in textbooks someday. This violence takes its toll and can leave us all feeling a little bit jaded. Right now, people of every color have been watching their televisions in disbelief, reading headlines in horror, and feeling the heavy truth that our nation is still an extremely divided one. It’s really easy to draw lines in the sand and get comfortable with an Us versus Them mentality. The “good people”, vs. “the bad people.”  We might righteously invoke the likes of Martin Luther King Jr. as an example of the Good Kind™ of protester while sneering in disgust at these current Bad Guys™.

But it’s not that simple. 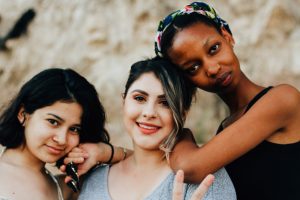 And it doesn’t have to be this polarizing.

Part of bridging the divide during massive racial unrest involves suspending our own hatred, disgust, or indifference, and leaning into that good, old mental health tactic of empathy.

This does NOT mean condoning wrong actions. Destruction of property is wrong. Stealing is wrong. Arson is wrong. Murder is wrong. The truth won’t bend no matter the level of emotions present and it’s important to speak out honestly and accurately about wrongdoing. But there are more than two options here. You don’t have to hate the criminals and let bitterness fester in your own mind and heart. Nor do you have to gleefully cheer rioters on and pretend you’re a crusader for social justice. But overarching all of this— the violence and destruction aren’t supposed to be the main issue now and certainly shouldn’t distract us from what is.

Empathy in a time of chaos is part of the antidote to this division. And it’s important to understand what empathy is and what it isn’t. Many psychologists agree that there are various levels of empathy: cognitive, emotional and compassionate. Cognitive empathy is the ability to consider another person’s perspective, though the emotional component isn’t necessarily felt. Even people with personality disorders or low emotional intelligence can be cognitively empathic. It has its place in society but it falls short of satisfying interpersonal needs. Emotional empathy is what most people commonly reference and that is often having sympathy (“feeling bad”) for someone—whether that’s for Black people, the cops, or the shop owners. You can feel their pain and maybe even understand it. This is the kind of empathy that has you crying at a sad movie or feeling the joy of someone’s pregnancy announcement. In brain science, emotional empathy involves the firing up of mirror neurons that are prone to the ‘contagious’ emotions of other. This too, has an obvious place in society and— without getting into a discussion of boundaries— it’s an excellent tool for deepening relationships.

But the highest level of empathy is the compassionate type or what I like to refer to as whole empathy. This is to comprehend the feelings of another, to be with another in his/her struggle (and moved to action if necessary), and to be convicted that this is worth the time and energy to do so. It involves a willingness to suspend judgement and truly listen for the sake of understanding. This is the ground in which the strongest and healthiest of human bonds are formed. And in this space of solidarity, there’s not always warm and fuzzy feelings. Empathy can be angry. Very angry. But there exists a constructive anger that is the exact opposite of destructive anger. It is the anger of demanding justice. And advocating for ways to make that happen. It involves speaking truth at all times, but also seeking to understand the context of the unrest. Empathy says “This is not right. Minorities have been mistreated in this country and in contemptible ways even by the arms of the State. And I want to make space for helping to correct this injustice.” Whole, compassionate empathy doesn’t look away when confronted with suffering. Nor does it mean to observe suffering and injustice apathetically on our TV screens with one hand in the Pringles container. Whole empathy asks What can I do to understand and to ease the plight of those suffering?

The beautiful thing about empathy is that it never loses. Being with people in pain not only serves their needs and moves forward the common goal of peace, but it produces a positive shift in the brain on the part of the person extending it. Empathy is good for the mental health of everybody. May George Floyd rest in peace. May meaningful change begin to happen. And may the wellness, healing and humanity of everybody begin to be prioritized in our country.